How can I unlock Go Studio FX's in-app-purchases?

Most of Go Studio FX is included in the initial free download, but there are additional effect styles to be gained.  You can either purchase these additional effect styles within the app, or you can unlock them by connecting any USB-equipped TC Helicon Product. Simply launch Go Studio FX, connect one of the supported devices to your iOS device via USB, and the app will become fully unlocked. 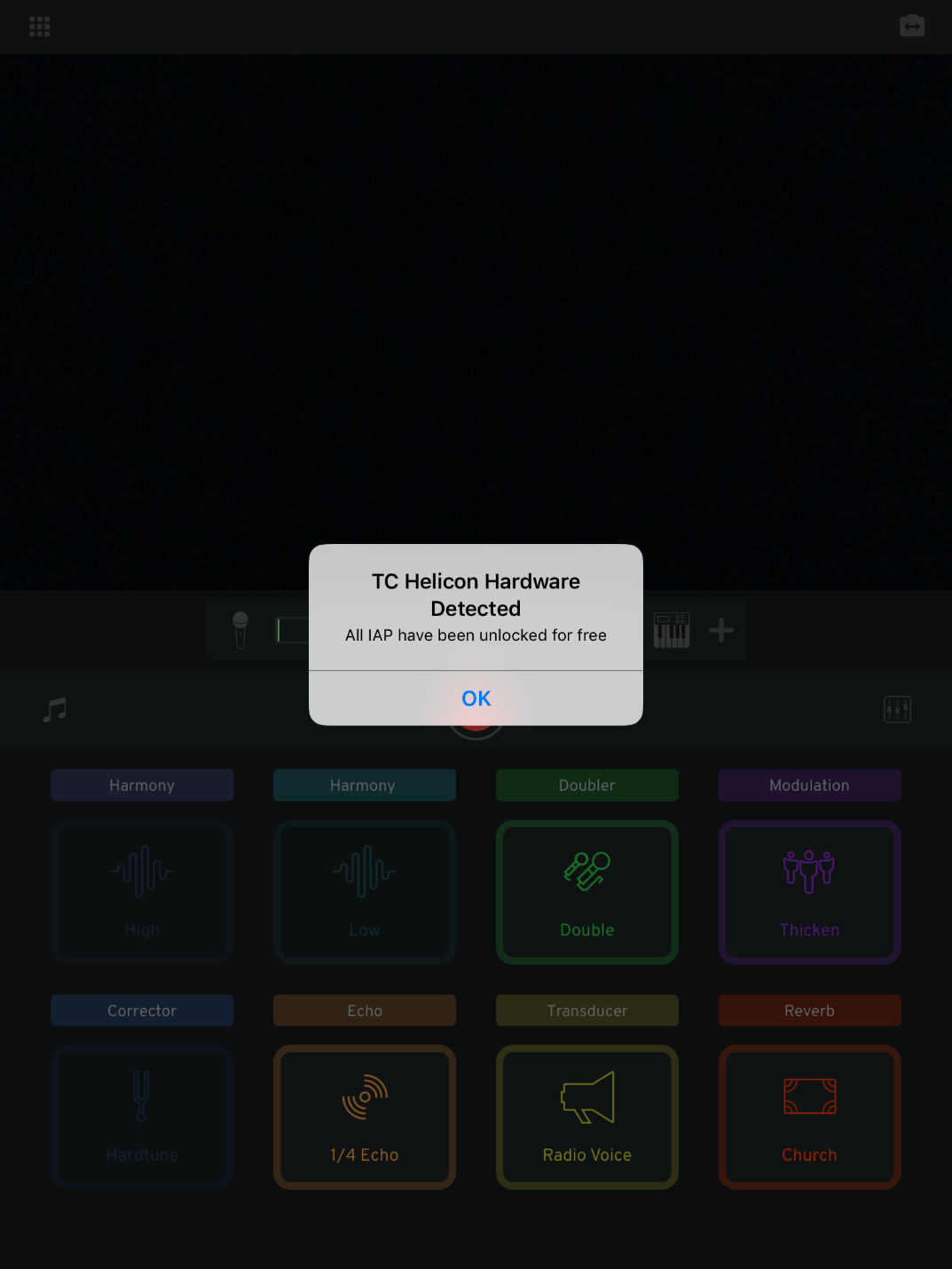 I had previously unlocked the in-app-purchases but now they're locked again.  What happened?

If you purchase any of Go Studio FX's in-app purchasable items, they will remain unlocked forever (unless you uninstall the app, but you can Restore your purchases after reinstalling in this case).  However, if you unlocked Go Studio FX's in-app-purchases by connecting a supported TC Helicon product, these unlocked effect styles will remain available to you for 30 days and 15 app-launches (both must be true) after connecting your TC Helicon device.  This means you can use the app without connecting your device as many launches as you want for 30 days, or after 30 days until you've launched it 15 times, after which you will need to re-connect your TC Helicon device to unlock the effect styles again.

How can I connect an interface to my iOS device to record into Go Studio FX?

If you're looking for higher-quality recordings by connecting your own microphone, or if you'd like to connect an instrument, you can use an external interface.  Depending on the interface you'd like to use, you can either work with USB audio or analog audio...

How can the Harmony and Corrector effects automatically detect the key of my song?

Channel separation is crucial here.  Simultaneously singing and playing an instrument into a single channel (one microphone) will not allow for automatic key detection, and you'll end up having to apply the same effects to both together which, c'mon we can do better than that!  Automatic key detection requires an additional audio channel that is distinct from your vocal input - either a backing track or instrument track must be present.  After your final vocal performance, you'll be able to use Go Studio FX's mixer to adjust the levels of your vocal track against the level of your backing track or instrument track.

Once you've imported or recorded a backing track or instrument track it'll be analyzed by Go Studio FX to determine the track's key, and the Harmony and Corrector effects will utilize that key to gel with your vocals and sound awesome.

Which products can I connect to Go Studio FX for 2-channel USB audio (separate vocal and instrument channels)?

Go Twin is the best piece of gear to accomplish 2-channel audio with Go Studio FX.  It's portable, convenient, and will allow you to play an instrument and sing simultaneously.

VoiceLive 3 can also act as a 2-channel interface for use with Go Studio FX.  It's obviously less portable, but if you already have one then why not?!
To have your VoiceLive 3 act as an interface for your iOS device, there are a couple settings you need to adjust first.  In the VoiceLive 3's "Setup" menu, navigate to the "Input" tab and set the "USB Mode" to "DAW Tracking".  Then move to the "Output" tab, set the "XLR Output Mode" to "Dual Mono", then set the "USB Output Mode" to "Same as XLR".  This sets your vocals to output on channel 1 and the instrument to output on channel 2 of the USB audio output.
The physical connection between your VoiceLive 3 and iOS device is accomplished by taking a USB cable from the USB-mini port on the back of VoiceLive 3, and connecting the type-A end to Apple's camera connection kit which is then connected to your iOS device's Lightning port.
In Go Studio FX, start a new project, and connect your VoiceLive 3 via USB to use as a multi-channel audio device.  You'll observe a popup saying "Audio Routing Changed" and you can tap on the corresponding icon to enable the instrument on channel 2. 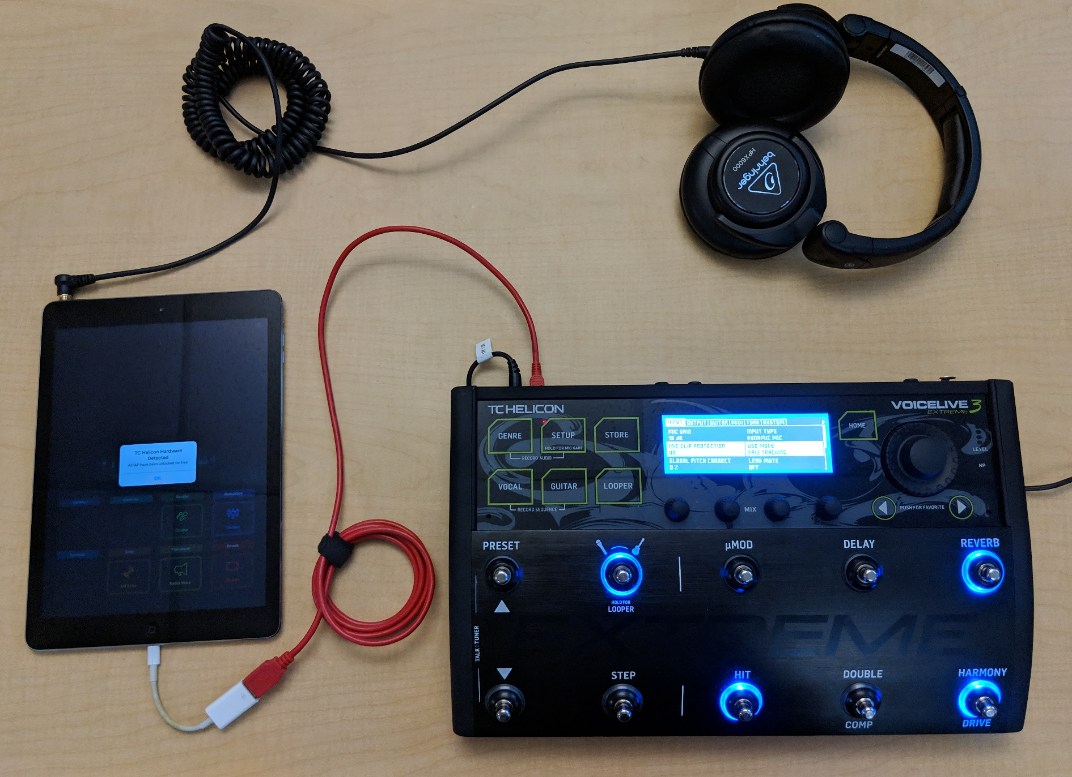 For monitoring your signals when using a VoiceLive 3, you have the choice of plugging your headphones into your iOS device or the VoiceLive 3 - both work great and will give you a full stereo soundstage, this is up to your preference!

Note that other TC Helicon gear like PlayAcoustic and VoiceLive Touch 2 can still unlock and be used with Go Studio FX, however these and other products which cannot separate USB channels won't be useful for 2-channel recording.  If you have one of these products, you can still use it, but you'll need to record your voice and instrument separately.  There is a list of products and how they handle USB audio here.